Ambient Tribe | GUEST POST: The impact of singing on stress by George Bell, On Song
Empower your company through great communication. We help companies improve their communication practices to inspire and engage their people, increase productivity and impact their bottom line.
15849
post-template-default,single,single-post,postid-15849,single-format-standard,ajax_fade,page_not_loaded,,footer_responsive_adv,qode-child-theme-ver-1.0.0,qode-theme-ver-10.1.1,wpb-js-composer js-comp-ver-5.0.1,vc_responsive

GUEST POST: The impact of singing on stress by George Bell, On Song 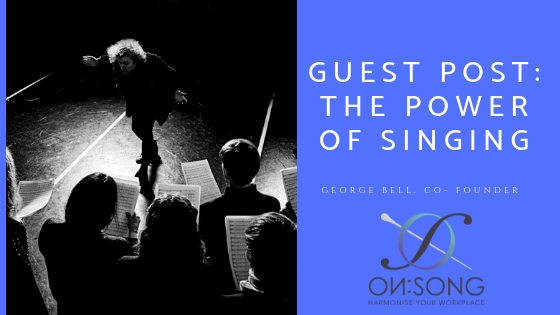 06 Nov GUEST POST: The impact of singing on stress by George Bell, On Song

Singing is hugely beneficial towards improving wellbeing and mental health in the workplace. A lifelong musician, I joined a choir run on:song co-founder Greg Staw four years ago, the first I had sung in since school. I was so profoundly influenced by my experience, and those around me, that I was driven to quit my job and start on:song, bringing choir to workplaces around the UK.

Let us start by considering what initially drove humans to make music. Evolutionary psychologists spend a lot of time head scratching over this conundrum, and are not always in agreement over its origins. Darwin’s theory was that music evolved as a display to attract mates,  known more recently as the Mick Jagger theory of sexual selection. By contrast, Stephen Pinker famously stated that music is not evolutionary adaptation at all but is, instead, “auditory cheesecake”, implying a delightful dessert but, from an evolutionary perspective, no more than a by-product of language. Regardless how it originated however, nobody is in disagreement about the profound benefits that singing has brought for body and mind.

Evolutionary accounts do however emphasize the role of music in social bonding, and rather than simply a by-product of evolution, music or more precisely musicality is likely to be a characteristic that survived natural selection in order to stimulate and develop our mental and social faculties. Hunter-gatherer would join together in larger groups that involved ceremonial singing, and in ancient times we see the first traces of music being used as a tool to promote health and wellbeing, the first such recorded instance as being by Ionian philosopher and inventor of the triangle, Pythagoras. However, music therapy as we recognise it today has its origins in World War II, when musicians played and sang for wounded bedridden soldiers, aiming to relieving their boredom. More than just being entertained, it became apparent that for many of these convalescing soldiers music improved their mental health by decreasing depression, increasing emotional expression and improving socialisation and morale.

Singing is a very complex process, getting synapses firing in various areas of our brain through simultaneously juggling pitch, tempo, rhythm, dynamics and lyrics, whilst listening to those around you and following the gesticulating of the conductor. This automatically puts the brain into a state of what in positive psychology is known as Flow, or more colloquially as ‘being in the zone’. This is a mental state of operation involving a fully energised focus, basically meaning that it’s almost impossible to think of anything else, a valuable, and often very rare chance to switch off from the many all consuming pressures of work and modern life. Singing thus has a lot of parallels with mindfulness, or even meditation. Furthermore, in the mindful act of singing we unknowingly open ourselves up to a flood of emotions, memories, and associations, which can often lead us to new insights, empathizing with different ways of thinking and feeling that we have not hitherto explored.

Singing increases feelings of self-worth and self-confidence. However, a stat we often quote is that most adults have been told at some stage that they can’t sing, and yet less than 2% of people are actually tone deaf. We help people to overcome this fictitious confidence gap through charismatic and inclusive musical leadership, musically inspiring repertoire and through the app that we have built, which supports individual learning and development. When it comes to singing, confidence is key.

Singing with confidence has a calming yet energizing effect on people, soothing nerves and elevating spirits. A big part of this is due to the relatively well-known fact that singing promotes the release of the oxytocin, serotonin and dopamine, which help increase the sense of trust and bonding and thus helps combat loneliness or depression. It’s fair to say, coming from a personal perspective, that a stressful day, or a day containing lots of screen time doesn’t automatically make one feel like participating in group activity.  A very often heard quote we hear after on:song rehearsals goes along the lines of; “I nearly didn’t come today, I didn’t really didn’t feel like singing, but now feel great and can’t wait until next week”.

Stress is a well known trigger of mental health issues, and singing reduces the stress hormone cortisol. Prolonged exposure to cortisol can have harmful physical and psychological effects, including heart disease and depression. Another way that singing reduces stress is through the effect that it can have on your breathing. As we sing in unison, so we all breathe together, and speed up and slow down our hearts together. Believe it or not, our hearts literally begin beating in unison. Think also about how acting coaches turn to breathing techniques to turn nervous speakers into confident extroverts. Correct singing necessitates controlled diaphragmatic breathing, taking in more oxygen, exhaling greater levels of carbon dioxide and improving brain circulation. This makes us feel more awake and energised, and improves concentration and memory.

Working towards a common goal, such as a performance, also makes for very rewarding outcomes, engendering an increased sense of self-esteem, confidence, recognition and status. It is here, as any well functioning team, that it is best recognised how the whole is greater than the sum of the parts, something unanimously recognised by choirs. Singing together fosters social closeness – even in large group contexts where individuals are not known to each other. Singing is also nurturing because it can put people in a position of being vulnerable, which requires a sense of trust in those around you, trust that they will actually sing and not leave you hanging, for starters, but also that they will also commit themselves, expose themselves, and in doing so co-create a supporting environment.